For the start, here's what i've found.
Women can be so complicated kan?
But that makes the world beautiful and colourful.

- Posted using BlogPress from my iPhone

Hadiff dah masuk tadika..
yeap few of my relatives said he is still small for a kindy.
In fact his baby sitter said so..but knowing HadiffBolat (yg dah tak berapa bolat), we knew that he will benefited from meeting friends and learning basics like ABC or alif ba ta.
Initially we wanted to enroll him in PASTI located nearby but unfortunately they don't accept 4 years old student (though Hadiff actual age is 3 years 3 months).
So we enrolled him at Tadika Mutiara Millenium that claimed to be an English Islamic kindergarten (though i'm very much doubt the ability of the teachers to teach in English :p)

Initially we didn't plan to buy anything for him, macam anak org lain with new clothes and bag.
Tapi macam kesian pulak, so we ended up buying a THOMAS AND FRIENDS bag (yg..hmmm super expensive for my liking)
Bad decision made, should ask him to choose the bag himself...but eventually he accept it.
The thing is he's now a fan of JAMES (a friend of THOMAS)..not THOMAS anymore..
Sabaq ja lah..adeyyyy 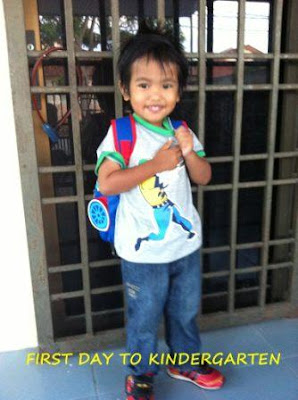 and the bag that made him super excited to go to school. Luckily there is a peek of JAMES besides THOMAS..:P

In his classroom on his first day.

He didn't has any problem sangat when we sneakily went out. He told us that he only "nangis cikiiit saja" when he found out that we were gone.. Now he goes to school with a van. He's getting more independent every day. We don't expect him to learn so much from the school, we just want him to socialize and make friends.

We are proud of you Muhammad Hadiff Raef!!
Labels: CharmingHadiff 3 comments

- Posted using BlogPress from my iPhone