Hadiff doesn't really know what is Teacher's Day. I do believe, they did not celebrate the day yet at Hadiff's kindy..
Yalahh dahlaa newly opened and the kids are mostly 4 and 5 years old.
I wanted to sew a simple clutch for the teachers (ada 4 orang ja pun)....ceyyy verangan as usual la..
but since it is a last minute project and I was so tired, I only managed to whip up a very simple project which I had been planning to do for quite some time. 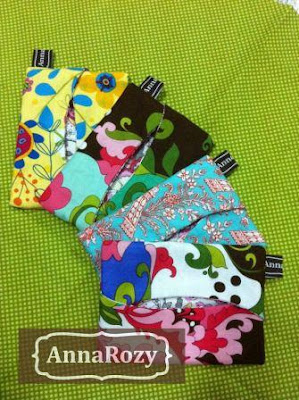 Can you guess what is this?
Tissue holder!! You can follow the free tutorial HERE. It is soo simple and easy to do.
I told Hadiff to say Selamat Hari Guru..but you know what..while passing the paper bag to cikgu Dayah.. (giler malas mak dia ni nak bungkus ka apa :p), he said Terima kasih!! <--sabaq jalah.

OK lah Hadiff ya, kasik can laa kat Ummi kan..ni first year nak act as a mother of a kindy goer.
Next year, I promise I will do much better (or beli saja...)
Labels: CharmingHadiff, Exclusively Rozy's handmade