You heard it right!
I have a plan for the sewsukasukie's future..(though not laaa big sangat pun)
This time it is a S.E.R.I.O.U.S plan.
I will be more focusing on sewing children clothes..
well let say I start with simple and easy to sew clothes dulu..take a baby step.
At this moment, I'm in the progress of collecting material, like fabrics and patterns..
I bought several patterns in the net which had cost me quite a bomb.

Please pray for my success. Thank you.

Okes..a wee update on my kiddos.

Hadiff Raef
Please call him ABANG, he really insists on this eventhough Mr Asben kept telling him that he is only a abang for his adik Husna.
He is trying real hard not to cry whenever Husna kacau.. (or at least tolak balik)
He has totally wean from bottle...yippeee!!!
He can verse doa makan, doa masuk tandas and another doa which me and Mr Asben still try to figure out (he learn it from babysitter's daughter)
And he loves reciting Aliff Ba Ta song
He's favourite pass time activity is taking pictures or videos using my iphone
Still hook on cars, shaun the sheep and thomas and friends 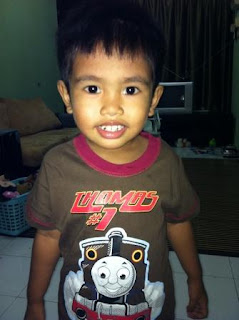 Hadiff with his favourite t-shirt of course 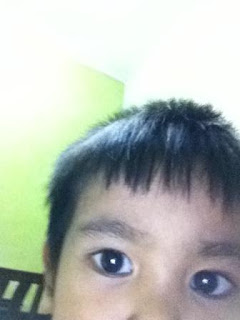 Husna Raihannah
She loves picking a fight on her abang..i mean reaaaaaaaaaaaaaaaly loves it.
She had started to show her willingness to get out from SSC, she loves to walk walk walk (the end of my babywearing day i guess :( )
She can say Ummi and Abah (yell actually)
She can follow ABC apps in my iphone
Her tactic to get attention is rolling on the floor from one end to the other, but our tactic is just to ignore her ..hehehhe :p
She had showed jealousy if abang gets something and she gets nothing.. 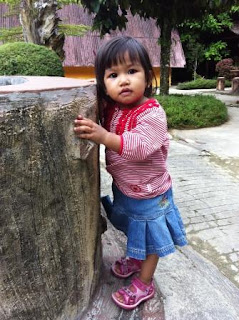