Questions that make me win an iPod shuffle 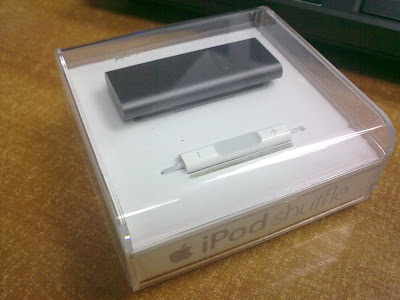 My RnD Vice President ~Volkmar Schultz has decided to abandon (?) us and wants duduk diam-diam in Germany (he hates traveling by now). So today he said lets gather and bring along a pen and a paper.

He wrote some figures on the whiteboard, and we were requested to write down on the paper the meaning behind the figures. First answer wrong, you are out. And the prize is an iPod shuffle.

Me and another engineer got the first figure right. The rest all wrong.
VS skipped the second (though we knew the answer)
We were clueless on the 3rd figure
I knew the 4th...so I am the WINNER...yeayy!!!!

I searched the net and surprised to know that this gadget worth RM299!

But frankly, this thing is not much use to me.
I have a MP4 which almost 2 years I never use.
I have a NOKIA XpressMusic 8GB (prezzie from Mr Asben..very thankful for that) which is more than enough for me <-never use its music function though..

But never mind, now I have an iPod!!

I am sooo lucky, ain't I?
Labels: Think Tank Contest

hehehh...bg kt mr asben dah..
though he also doesn't know what to do with that (dia kata tuk remaja ok laa), i guess he will figure out..