Muhammad Hadiff Raef sudah bertukar menjadi Ultraman.
He is now in that phase where he is the Ultraman (and his little sister is Robot Kecik Sajaaa.. :p).
He always said :
"Otromen dan besaq"
"Otromen naik ketapi ijau, bot, nek kapaitebang" <---reflecting his utmost obsession in transportation.
but the best thing is
"Otromen pandai kencing kat lubang" <--- he is potty trained!!! finaaaaaaallly!!
I was really grateful when I'd boldly changed his baby sitter from his one year babysitter Ibu to Husna's babysitter Mamak (read:mak).
Mak had PT him in just ONE DAY!! With not even one accident occurred.
Thanks god lega...., no more buying disposable (or adding new cloth diaper stash).

My Ultraman talks a lot..when we were gathered together, I couldn't have any peaceful conversation with dear hubby. He would cut off our conversation, just with a simple question "Tu apa?".
If we ignored him, he would cover my mouth and said "diamlaa, Otromen nak cakap ni".
When he was doing his bisness in the loo, he would sing, he would just mumbling talking nothing in particular.
Aaand it was hilarious :p.

He merajuk a lot. But that could only last for few minutes. It ended quicker if he had something to say.
Aaahh and I realised since Hadiff and Husna are under the same care taker, they seemed to accept each other much better. Lesser sibling rivalry. :)
That's all the updates. (at least not blogging about sewing ngeh..ngeh...ngeh)

Here is his latest pic (not really good one) of him with his cousins makan iceream. 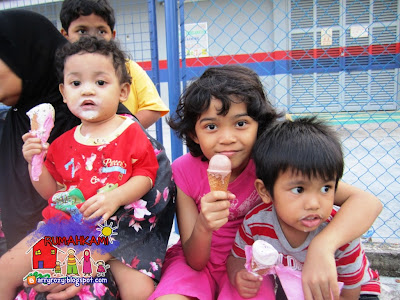