I came across an entry in a friend's blog telling about his eldest son who loves to arrange toys like a long queues. And her son was about the same age as HadiffBolat when he started to do that.
Then only I noticed that recently HadiffBolat also loves to arrange things, I mean not only his toys but also coins and milk bottles.

Initially, when he started to arrange uikk (read:duit which he means duit syilling) in a moving car, Mr Asben and I had been suddenly really irritated by him. Yes, felt disturbed by HadiffBolat's yelling and frustrations when his properly arranged uikk started to slide down. How do you expect coins to be static on a slippery water proof cushion car seat of a moving car? We kept explaining to him that his coins will definitely move but how do you expect an almost 2 years old boy to understand that? 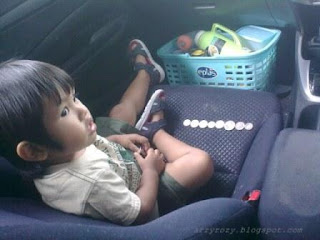 Luckily, Mr Asben had a brilliant idea. We played race with the coins and see which coin will reach HadiffBolat the fastest. It turned out to be a super D-duper fun game!! 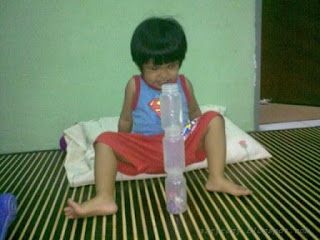 HadiffBolat with EBM storage bottles. It was a big accomplishment for me *big clap*
Labels: Charming Abang Hadiff